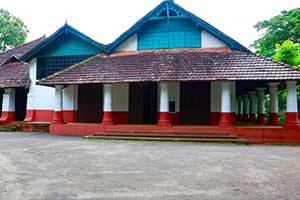 The Great Hall, CMS College is a landmark in the cultural history of Central Travancore. It was Principal French Adams who had the idea of building a Hall in order to conduct meetings for the whole college. Accordingly work was started in 1892 and completed in just over a year. The Hall was big enough to seat 500 persons and was at that period of time the biggest auditorium in Central Travancore. Many of the public functions in Central Travancore were held in the Great Hall and therefore, it was at one time the Town Hall as well. Built with imposing doorways and large windows with a broad verandah running all round it, the Great Hall was supported by tall iron pillars. The glass panes that let in the light at the entrance were ones that had been brought from England. The Great Hall was extended in 2003 with great care taken to preserve its original beauty and ambience. Witness to momentous events and illustrious personages, the Great Hall, though no longer great in its physical proportions, continues to be a cherished memory in the hearts of generations of students. The Great Hall and its noble pillars have been immortalized in canvas and celluloid, in words and sketches. It continues to inspire all those who enter its portals to pay their respects to the great principals who have steered the college through the years.